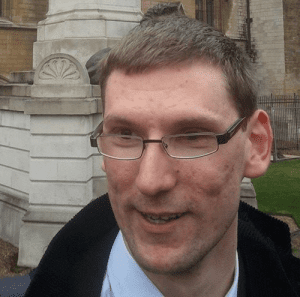 Jamie Clark was Sports Editor of Coral bookmakers between 2014 and 2017 during their merger with Labrokes and a key period for the British betting industry. Working as a bookie’s runner on the point to point circuit in the Midlands and at Market Rasen Racecourse where his late godfather had a trackside pitch growing up, he has had ties to horse racing all of his life. A regular visitor to Cheltenham during the National Hunt season and York over the summer, he has been involved in Horsebetting.com since its inception. Jamie now brings you his take on major news stories from the racing world and those all-important betting tips.

A sports fanatic, he holds a Masters degree in Web Journalism from the University of Sheffield and has reported on many Cheltenham Festivals, Grand Nationals and Flat meetings during his career to date. He has also covered World Cups in football, rugby and cricket, Grand Slam tennis tournaments, and global championships in many other sports. Away from the horses, Jamie is a long-suffering Crystal Palace supporter, enjoys snooker and athletics, and working out at his local gym. He had a fondness for stayers and mares, as well as Irish horse racing. At one time or another, he has worked with most of the major bookmakers in the UK to enhance their coverage of horse racing and many other popular sports.

A well-respected member of the horse racing community, he produced a Cheltenham Festival guide with former eight-times champion national hunt jockey Peter Scudamore, MBE, after helping him to set up a syndicate for his trainer son Michael. Dave also had a column in the Racing Plus newspaper called Behind Enemy Lines which focussed on finding value in major horse races.

When his head isn’t buried in the form book finding horse racing betting tips for you, Dave can usually be found on a racetrack. He has visited 44 different racecourses in the UK so far.

Horsebetting.com can help you get you the right sign up bonus HOW ...

Compare and Choose your Best Bookmaker For Horse Racing The beautiful thing ...

By using our odds comparison for UK horse racing search, you are ...

Latest News
Ghaiyyath follows-up at Sandown with Eclipse of Enable
Ghaiyyath backed up a fine run by making ...
Donnacha O’Brien wins first Group 1 as a trainer with Fancy Blue in Prix de Diane
Like father, like son as Fancy Blue prevailed ...
The strangest Epsom Derby ever but Aidan O’Brien makes history anyway
Where do you even begin to describe Epsom ...
What next for Pinatubo?
Pinatubo was the best thing since sliced bread ...
Why letting the 30 June race meeting at Leicester go ahead was a mistake
If there is one thing that sport desperately ...
Top Betting Sites
Top Betting Bonuses

Unibet Bonus
100% up to £40
T&Cs apply
9.6/10
New customers only. Age 18+. Located in the United Kingdom. First losing bet returned as a bonus bet at the same value. Begambleaware. T&Cs apply

Betvictor Bonus
600% up to £30
T&Cs apply
9.4/10
New customers only. Deposit and place a £5 qualifying bet at odds of 2.00 or greater within 7 days of opening a new account; excludes cashed out bets. Receive 2x £10 Free Sports Bets, valid on set events only at odds 2.00 or greater, expires in 7 days. Geographical Restrictions and T&Cs apply
Go to Sports Betting Bonus Comparison

Move to Top
×
Your Bonus Code:
The bonus offer was already opened in an additional window. If not, you can open it also by clicking the following link:
Go to Provider
Close
Did someone order a bonus to go? Grab it while it's hot!